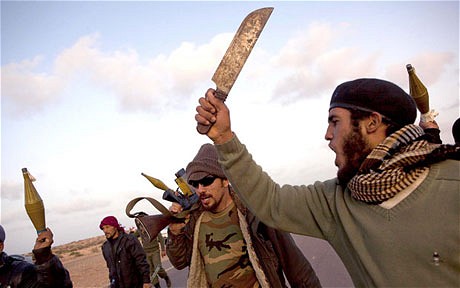 “Let us face the truth….(N)either Clinton nor Blair gives a damn about the Kosovar Albanians. This action has been another blatant and brutal assertion of US power using NATO as its missile….to consolidate….American domination of Europe.”

Today, Obama doesn’t give a damn about Libyans, any more than about Iraqis, Afghans or working Americans. At issue only is Washington wanting unchallenged dominance everywhere, including over the Mediterranean Basin, using two missiles – NATO and so-called rebels, enlisted, funded, trained and armed well before bombing began on March 19.

On March 23, London Telegraph writer Rob Crilly headlined, “Libya: it wasn’t supposed to be like this in free Benghazi,” saying:

Under rebel control, Benghazi residents are terrorized, many “too frightened to drive through the dark streets at night, fearing a shakedown or worse at the proliferating checkpoints.” One man said unless they know you, they assume you’re pro-Gaddafi.

Throughout rebel-held areas, “firebombed buildings, defaced posters, incendiary graffiti, (and other actions) testify to the depths of hatred (toward) the regime.”

Perhaps it’s also effective recruiting, choosing the right fighters and convincing them that Western imperialism is humanitarian intervention when, in fact, it’s to carve up another conquered nation’s corpse, installing new leaders to serve Washington, not Libyans.

As a result, “(m)any associated with (Gaddafi) have been arrested, exiled or killed,” in a rampaging purge, “raising some uncomfortable issues” for rebel leaders and independent observers.

Claiming only pro-Gaddafi supporters “with blood on their hands” are being targeted, youth gangs are terrorizing Libyans, using “rat-hunting” harassment, arrests, and “spontaneous roadside executions.”

Actions, in fact, are so out-of-control that unchecked witch-hunt justice threatens anyone suspected of pro-regime support. In other words, they’re guilty by accusation, rebels acting as judges, juries and executioners with full Western backing.

Bodies are showing up around Benghazi. “Three weeks ago, a traveler spotted (one) in farmland on the city’s outskirts, shot twice in the head with his hands and feet bound.” He disappeared the previous day after visiting a market. Days later, another one was also found, murdered the same way. “Masked, armed men had taken him from his home the night before, without giving a reason, his wife said.”

Like many others, both killings are unsolved, and in rebel-held territory, investigations aren’t conducted in a climate of death squad justice. As a result, Benghazi residents are “paranoid,” wondering who’s next, and when lawless killings will stop.

In fact, the entire city is unsettled, intimidated by rebel gangs rounding up suspected Gaddafi sympathizers. Unless stopped, “it will pose a (stiff) challenge to (insurgent leaders) trying to present a vision of a new country committed to the rule of law, while potentially undermining hopes for” peace and justice.

For weeks without letup, episodes like the following have raged:

In early May, “about a dozen men wearing balaclavas (ski masks) and carrying guns arrived at the house of Youssef al Tobouli in three pickup trucks.” A former prison guard, he defected and was at his store. “His terrified relatives called friends, and in the gunfight that followed, the room (he) shared with his wife and three children was destroyed by fire.”

Numerous other attacks are reported. According to Benghazi Jalaa Hospital’s Dr. Omar Khalid, bodies of executed men show up regularly though no one knows if they were regime sympathizers. Some were shot. Others had their throats cut. They all came dead on arrival.

Deadly episodes leave everyone gripped with fear. “Last week, rebel fighters in pickup trucks rushed to the city’s radio station,” suspecting Gaddafi loyalists inside. “Guns were fired, and a bystander was….killed….This is a war of rumors,” said the station’s security guard. “People are very edgy” with good reason.

Even defectors like Hussein Gaith turn up dead, his wife saying:

“He didn’t have any enemies. He joined the revolution 20 days after it started.”

Yet he was abducted and killed, showing signs he resisted. Until America intervened, Libya functioned normally. Now it’s the wild west, becoming the worst of what Iraqis and Afghans face daily, including deep poverty, unemployment, repression, and extreme violence, mostly affecting civilians.

Oscar Wilde once called a “hypocrite (someone) who ceases to perceive his deception, the one who lies with sincerity.”

Twenty-eight months into his presidency, Obama mastered the art of duplicity, contemptuously calling imperial slaughter humanitarian intervention, using NATO and human “missiles” for regime change, no matter how many corpses it takes.

All programs are archived for easy listening: http://www.progressiveradionetwork.com/the-progressive-news-hour/