The Serpent People Return to Ukraine

Posted on August 8, 2014 by apocalypsetime 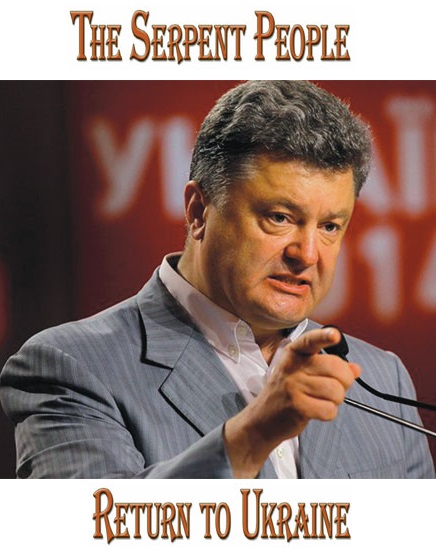 “Ye serpents, ye generation (race or nation) of vipers, how can ye escape the damnation of hell?” – (Jesus Christ – Matthew 23:33)

“We have journeyed to the center of the world and landed in the belly of the serpent.”
Rabbi Joel Bakst – “Journey to the Center of the Torah,” – www.chazantorah.org , 2007

Everything is coming together. DNA Science has torn back the curtains of time and revealed the Serpent and his people. The ones we today call “Jews” are the very disciples of the evil entity whom the Bible describes as, “that old serpent, the devil.”

Texe Marrs’ revealing book which reveals that the people known today as “Jews” came from Khazaria. They are not descendants of ancient Israel. The book’s conclusions are the impetus for the Jewish takeover of Ukraine.

From the early centuries of the first millennia, the Khazars of Eastern Europe were known as the diabolical “Serpent People,” and now, the nation of Israel has admitted that its people are indeed, the Khazars.

The admission by the Israelis that the Jews are not related to ancient Israel but to Khazaria was reported in The Times of Israel (Leaked Report: Israel Acknowledges Jews in fact Khazars; Secret Plan for Reverse Migration to Ukraine, March 18, 2014). That article, by Professor Jim Wald, related that the Israeli leadership in Jerusalem is sending military equipment and settlers from Israel to Ukraine.

The Jews have taken charge of that ravaged country’s government and finances and intend eventually to make the Ukraine a “second homeland” for the Jews.

Their plan, leaked by governmental insiders, came only after Netanyahu and his cabinet reviewed growing DNA genetic evidence that the Jews are not the descendants of Abraham. Instead, they came from Khazaria, of which Kiev, Ukraine is the centerpiece. In fact, the Jews of Israel and the U.S. are of Ukrainian heritage. Ukraine is in the heartland of Khazaria.

The rabbis teach that in the eighth century, the entire nation of Khazaria converted to the Talmud and to kabbalistic Judaism. Adopting the sordid, but occultly revealing, sex symbol of the six-pointed star, the pagan Khazars, known for centuries as the “Serpent People,” battled against both Christians and Islamists. Later, as converted “Jews” they migrated to Poland and Eastern Europe. Today they are found mostly in the U.S.A. and in Israel.

DNA Science has today confirmed this Khazar lineage of the Jews. I document the Khazar bloodline heritage in my definitive book, DNA Science and the Jewish Bloodline. 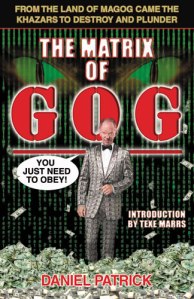 This outstanding, new book explains that the Khazar Jews are in fact “Gog and Magog.” Their prophetic destiny is to plunder Israel and the Middle East and to use the United States as their proxy for a New World Order.

The Khazars, identified in Revelation 2 and 3 as the wicked “Synagogue of Satan,” are further identified in Ezekiel 38 and 39 prophetically as the people of Gog, from the land of Magog. Prophecy clearly tells us that this warlike serpentine people shall invade and conquer Israel first, then go on to plunge the entire planet into chaos and warfare (Revelation 20).

From Khazaria to Israel, and back to Khazaria (Ukraine) is Israel’s secret plan. After suppressing the Ukraine nation, the Jewish conquests will continue until the Jews achieve their New World Order.

In 2007, American political science professors James Petras, John Mearsheimer and Stephen Walt reached the conclusion that America’s foreign policy is now dominated by the Israel Lobby. The Jews do this through their powerful monied groups, AIPAC, the ADL, and the AJC. They control both the Republican and the Democrat Parties, and the White House does their bidding. That bidding includes the conquest of Ukraine.

But, how did the Jews come to acknowledge their Khazarian bloodline link? Professor Jim Wald notes in The Times of Israel:

“The surprising turn of events had an even more surprising origin: Genetics, a field in which Israeli scholars have long excelled.“It is well known that sometime in the eighth and ninth centuries, the Khazars, a warlike Turkic people, converted to Judaism and ruled over a vast domain in what became southern Russia and Ukraine. What happened to them after the Russians destroyed that empire around the eleventh century has become a mystery. Many have speculated that the Khazars became the ancestors of Ashkenazi Jews.

“During the U.N. debate over Palestine’s partition, Chaim Weizman responded… ‘It is very strange. All my life I have been a Jew, felt like a Jew, and I now learn that I am a Khazar.’”

A Blue-Ribbon Team of Scholars

The 2012 genetic discoveries by Dr. Eran Elhaik of the prestigious Johns Hopkins Medical University, that the Jews are not of ancient Israel but originated in Khazaria, stunned the Israelis. It has now been followed by other high-level scientific research. Wald reports that, “a blueribbon team of scholars from leading research institutions and museums” was then appointed to study the DNA.

A blue-ribbon committee of scientists reviewed the DNA and other evidence and told the Israeli government that, indeed, the Jews are of the Khazarian bloodline. Prime Minister Netanyahu has secretly decided to settle Jews in Ukraine, and infuse that country with military and intelligence officials. In essence, the Jews will make Ukraine, centerpiece of ancient Khazaria, a second homeland for the Jews.

These authorities, said Wald, “issued a secret report to the government acknowledging the fact that European Jews are in fact Khazars.”

At first, this result was deemed unhappy, even ominous, but, says Wald, Prime Minister Netanyahu and his advisors surprised us by bringing in their “Ukraine Solution.” Some Jewish settlers would leave Israel and return to Ukraine. This resettling into Ukraine would take time, for reasons of logistics and economics. The end result, however, would be two Jewish homelands, Israel and Ukraine.

“We’re not talking about all the Ashkenazi Jews going back to Ukraine,” explained a well-placed source in intelligence circles, “obviously this is not practical.”

Wald calls this solution “Khazaria 2.0.” “All Jews will be welcomed back to Ukraine without condition as citizens.” What’s more, the Israeli government promises an “infusion of massive Israeli military assistance” to Ukraine, “including troops, equipment, and construction of new bases.”

“If the initial transfer works, other West Bank settlers would be encouraged to relocate to Ukraine as well.”

In effect, Ukraine is to become an “autonomous Jewish domain,” a small-scale successor to the medieval empire of Khazaria… It would be called, in Yiddish, Chazerai.

“By lining up with the Syrian rebels and Ukraine, as well as Georgia and Azerbaijan” (also part of the ancient Khazarian territory), one source explains, Netanyahu “puts pressure on both Syria and Russia.” 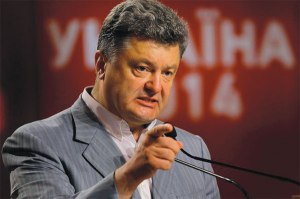 Petro Poroshenko, new President of Ukraine, is Jewish. The Jews, with U.S. support and manipulation, now control Ukraine and are busy murdering Ukranians and setting up concentration camps. Israel plans to make Ukraine a second Jewish homeland. Currently, a meager 0.2 percent of Ukraine is made up of Jews, but the Jewish minority took over the USSR and massacred 66 million people!

Israel and U.S. Stage
a Bloody Coup in Ukraine

Thus, we understand the current Ukraine political mess. The Jews launched the quest for their new Ukrainian homeland. They have support from the United States, as witness—the Jewish diplomat, Victoria Nuland, of the State Department. The U.S. is warning Vladimir Putin to keep a distance from Ukraine and to relinquish Russia’s historic ties to that nation, now ruled by Israel.

The constitutionally elected Ukrainian President, Yanukovych, was overthrown last year by the U.S. and Israel, with the CIA and the Mossad both deeply involved. A Jewish billionaire, Petro Poroshenko, was quickly installed as President. Jewish money and military might is constantly being flown into Ukraine. Ukrainian Christians (not Jews!) are being slaughtered. Genocide is underway.

All property is being appropriated by Jewish oligarchs. The Israelis learned in Turkey (1905), the Soviet Union (1917), and Palestine (1948) how to work as a corrupt and calculating “minority” to dominate a larger, gentile majority.

We should all feel great pity and sorrow for the suffering Ukrainian people. They are being massacred and oppressed by the arrogant Zionist Jews who have, with America’s help, now become the “slave masters of Ukraine.” Even the concentration camps have been reopened and are filling up with native Ukrainians.

Israel’s oligarchs, under Poroshenko’s iron hand, are dividing up the spoils of their Ukrainian takeover. The economy is falling—it has sank to only forty percent of its pre-2013 level. Israel is stealing natural gas and oil from the destabilized Middle East and selling it for huge profits to energy-starved Ukraine. Everything will change.

The Jewish Monsters who run Ukraine are carrying out genocide and killings throughout the country. They are turning Ukraine into a “Jewish Homeland” for the Khazars. This is what the Jews, Lenin and Trotsky, did to Russia in 1917.

A village in the Ukraine after the Jewish armed forces ravaged the area.

This is the greatest tragedy since the Satanic Khazars invaded peaceful, unarmed Palestine in 1948, killing and battering the Palestinians and driving hundreds of thousands into desert refugee camps.

Americans are oblivious to the horror their Administration is causing the Ukraine people. But God knows. He sees. He feels. We have sowed the wind. Now we shall reap the whirlwind.

3 Responses to The Serpent People Return to Ukraine